Letters from the Globe-trotting Flat Boy 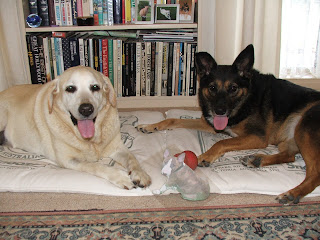 Hello every-bullie! DawgMom here! I thought rather than just tell you about Flat Papster's adventures in the Land of Oz, I would just post his emails so you can read all about it in his own words......... 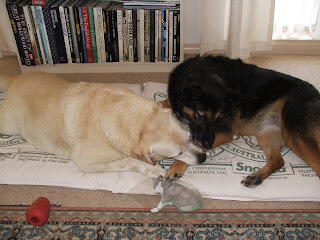 (With his new friends, Dash & Annie)
Email Number One:
G'day DawgMum!! Guess who? Yep, it's me... Flat Papster, woof, woof, and guess where I am? Give up? I'm at DawgUncle John and DawgAunt Sandie's farm at Moto... way, way over here at Orstraya!! I just arrived today and already I've been to visit DawgAunt Sandie's Mum and Dad (oh yeah, did ya know they say "mum" over here instead of "mom"?). We didn't take any photos at DawgAuntie Peggy and DawgUncle Ray's house 'cause DawgAunt Sandie didn't have her camera... she didn't know I'd arrived 'til she was driving out of her gates and found me hanging around her mailbox!!

But DawgAunt Sandie says not to worry 'cause they'll be taking me to a couple of places on the weekend where she can take some speshul photos to send y'all!

I think I'll like my little holiday here. There are two doggies called Dash and Annie, and a cat called Thomas... Dash and Annie seem to like him, even though he's a CAT! Can you believe that... doggies likin' a CAT, for goodness sake. But I reckon ol' Tom had better watch hisself now that The Papster's in town!!

And guess what else they got here? A whole lotta big cows and some liddle baby cows. Boy oh boy, a bully could sure have some fun chasin' that lot around!! And there's two big horseys too.

Anyway DawgMum (I think I oughta call you that while I'm over here, OK?), look out for some photos comin' thru in a coupla days. I'm gunna have a bit of rest now 'cause it was a long, long trip to get here ya know... it took me a whole 8 or 9 days! PHEW... fair dinkum, I'm dog-tired now, I can tell ya!

DawgAuntie Sandie says g'day to everyone over there and she sends big warm Aussie hugs for all my 3D bruvvers and sisters and for you and DawgDad too!! 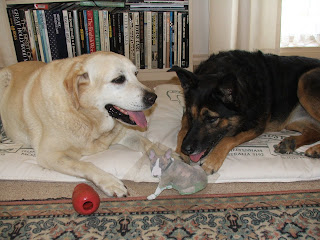 Boy oh boy, we've had a very busy day over here. First of all, you can tell 3D Pappy that I reckon he fibbed about those flyin' monkeys... I ain't seen nuttin' like that. But they do have these funny big things that look kinda like giant mouseys and they have big tails and big back legs and they jump along really, really fast. And Auntie Sandie said sometimes some of 'em come on her farm and us doggies have to watch out for 'em 'cause they'll hurt us. That's very nasty of 'em, doncha think?

Anyway, first we went to a town called Taree which is about 25kms from Auntie Sandie's house and where she goes shoppin'. You know, for goodies for her doggies and all. It's very nice there 'cause it's next to a big river called The Manning and the people are kind to doggies - they let 'em have fun in the riverside park. Here I am with Unca John at Manning Quays, lookin' at the river... 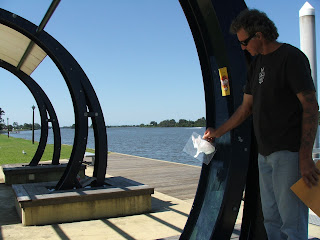 And while I was there I even 'tended I was a koala and tried to climb a tree!! Check this out... 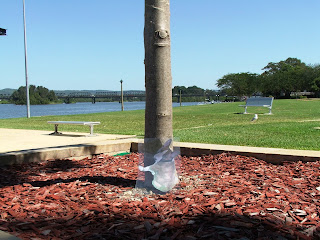 Anyway, then Auntie Sandie and Unca John took me to see this place called "The Big Oyster" - they said it used to be restaurant, but now it's just a car yard. Too bad, else we coulda gone in and had a nice big bit of steak or something! Here's me with Unca John standing out the front... 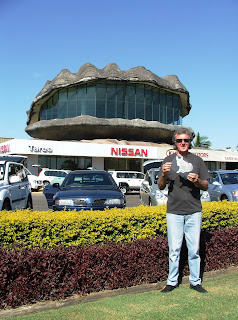 OK, so then we went about another 75kms all the way to a town called Bulahdelah and I met Auntie Sandie's boy who's called Nat. His friend Dave was puttin' on a big car and bike show called "Rock, Rattle 'n' Roll" and he'd asked Nat to come all the way from Sydney to be a judge! There were lots of old cars, some old trucks and some really nice motorcycles. You and DawgDad woulda really liked 'em! Unca John was s'posed to take his Ford truck, but the radiator was cracked so I missed out on havin' a ride in it. Dunno what a radiator is, but Nat and Dave were dis'pointed when we arrived in Auntie Sandie's car instead!! Anyhoo, Auntie Sandie and Unca John met a friend of theirs called Dave - a different Dave - and he had his funny old truck there. Auntie Sandie said I should have my photo taken with the truck 'cause it looked like it would make a good "Bullymobile". I hope she wasn't 'sinuating I'm a bit of a junkyard dog!! Anyway, here's me and Nat, with Dave's old Dodge DeSoto... can you see me at the driver's window?? Bet I fooled ya, huh? These weird ol' Aussies drive on the wrong side of the road, hahahahaha!! 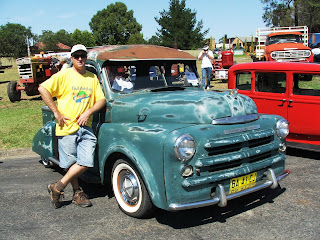 So, now here's the last photo. Auntie Sandie didn't know this man, but she asked him speshly if he would have his photo taken with me 'cause I was raisin' lots of money for poor bullies who don't have nice people to look after 'em. Not lucky doggies like 3D Pappy and Feather and Darla, but doggies like LizzaBelle and Skippy who didn't have lots of love until they came to stay with you and DawgDad. Anyhoo, the man was VERY nice and he had a big laugh and then said he'd be happy to let me sit on his.... HARLEY DAVIDSON!!! I'm a bit hard to see, 'cause he was holdin' me very close to his chest so I couldn't fall off. SO... now you can just tell that naughty Pappy, who tried to frighten me, that I didn't see any ol' green lady ridin' on a broom, but down in Bulahdelah one Saturday afternoon the folks did see a brindle and white bully ridin' on a green motorcycle. Woof, woof, aaarrroooooooo!!!! 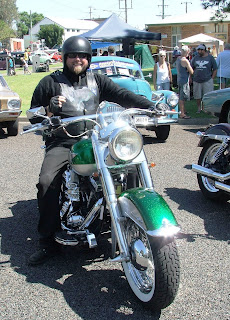 See ya later DawgMum... hope you like the photos! Dunno where I'm goin' next but I'll let ya know when I get there!!!

Lotsa love and licks from the happy traveller.... The Flat Papster XXXX

From the looks of Dash and Annie, all of them are plumb tuckered out from all the adventures! 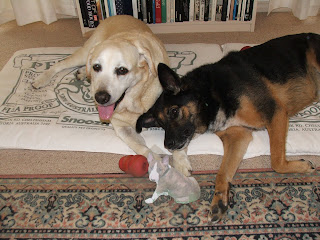 A huge Bull Terrier thank you to Sandie and John for helping us with our fundraising project and showing Flat Papster some of the cool sites! For more information on what we are doing and how you can host Flat Papster or Flat Benny to help Bull Terrier Rescue, see this post.

Next globe-trotting Flat Papster is off to Wagga Wagga! And I hear rumors that our US Flat Papster has robbed a bank???

Sure sounds like FlatPapster is having a wonderful time!

Thanks for sharing the adventures, looking forward to reading many more.

Haven't seen ya'll in a while. Good to see you, flat or otherwise!

That flat little fellow has had some adventures.BOL
Benny & Lily

NAK and The Residents of The Khottage Now With KhattleDog! said...

What a great time all The Flats are having!

Wagga Wagga is next? With a name like that it must be a wonderful place. Thanks for sharing the adventures with us. 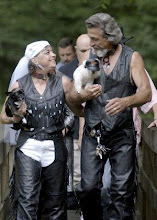